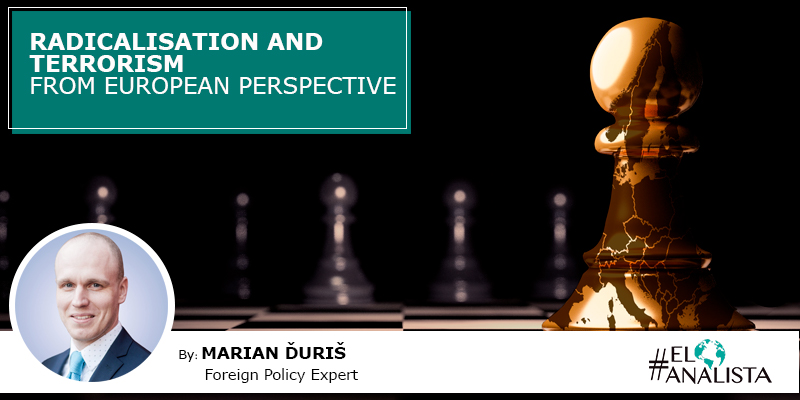 *Foreign policy expert with experience in international relations and security sphere in the United Kingdom and advisor to Member of European Parliament.

To combat the phenomenon of modern-day terrorism and radicalism, it is necessary to understand its origin, forms, transformations and strategies that have been developed to counter it and identify the mistakes that have been made along the way. The reasoning here is that the better grasp we have of the problem, the more sophisticated the tools we have to combat it can be.

The recourse to terror, together with attempts to politically justify it before any terrorized society gives a specific character to terrorist violence that distinguishes it from other forms. It means that terrorists consider the human being only as a means to achieve allegedly higher ends. Therefore, they produce high level of suffering, affecting the most vulnerable and unprotected areas of society.

The process of globalization in all scales of human action, accompanied with free movement of goods, persons, information and capital, represents a favourable environment for extremists to promote their ideas, attract new supporters and broaden the conflict area. The factors that may affect these phenom and tendencies are multiple and diverse – economic, social, educational, institutional; state-of-art information and communications technologies; activities of religious and other authorities, interfaith, interethnic or other tensions, the degree of feeling rejection, frustration, isolation, self-victimization and the failure to find socially acceptable mechanisms to solve the created contradictions and conflicts.

Be radical means to be criminal as per state of mind. Radicalisation has its own psychological and social aspects. As mentioned previously, not well educated, frustrated individual with connections to dangerous ideology or sectarian thinking becomes an easy target to affiliate dangerous organizations affecting mainly the fighting regions.

Proper national and sovereign policy in this field should be based on condemnation of all acts of terrorism – regardless of circumstances, forces that committed them, location, time and method of execution. Prevention and struggle against terrorism are important aspects of the achievement of foreign policy priorities in its endeavors to ensure long-lasting global and regional stability and to curb security threats posed by terrorism and other terrorism-related threats. Altered global and other circumstances have led to manifold changes in the nature of the threat in several key aspects:

● earlier security threats of regional character (as internal conflicts, absence of governance, unemployment, poverty, low level of social protection), have become more extensive – due to the interdependence of recent societies, and are supportive to the strengthening of radicalism and violent extremism,

● the existence of the terrorist structures in the MENA region (Middle East and northern Africa), which managed (sometimes with external help) to incite and recruit thousands of fighters and an incomparably higher number of supporters from almost all countries of the world, developing an enormous economic and other potential for supporting activities,

● the rise and accessibility of modern technologies have increased the risk of their misuse not only for communication, propaganda, recruitment and training purposes,

● the trend of decentralization of action is reflected in the opportunity for perpetrators to be self-radicalized individuals who independently decide to execute an attack,

● financial flows which may be used to finance terrorism, including money laundering and

connecting structures with crime and perpetration of criminal offences in the field of organised crime in the function of terrorism financing, are difficult to control,

● mass migration of unknown background and past, support of this migration type by certain activists and NGOs, and weak borders may be used for unimpeded movement of terrorists and be conducive to the development of extremism both in transit and final destination,

● although terrorists generally choose targets that are important social symbols, over the past time there have been increasingly more frequent attacks at all easily available targets,

executed by means at hand, while resulting in as many victims as possible, material

● proliferation and illegal trade in all types of weapons increase the danger that weapons come into the possession of structures which the government cannot control, particularly terrorist associations and individuals.

The European Union aims to be an area of freedom, security and justice, without internal frontiers. According to the statements in the documents, Europeans should feel confident that wherever they move within the EU, their freedom and security are well protected. Combating cross-border crime and terrorism is reported as a common European responsibility. EU countries have the front-line responsibility for security, yet EU cooperation is suitable to fight terrorism. While respecting national responsibilities for upholding the law and safeguarding internal security, all relevant EU and national actors work together to tackle terrorist threats emanating from home-grown or foreign terrorists, acting alone or in a group and realized by terrorist means. In December 2020, the European Commission adopted a new Counter-Terrorism Agenda for the EU, setting out a way forward for actions at EU level, looking to better anticipate, prevent, protect and respond to threats.

The Counter-Terrorism Agenda should be one of the deliverables of the way forward on internal security, a core component of the Security Union Strategy adopted by the Commission in July 2020 which should anticipate and respond to evolving threats by identifying vulnerabilities, building capacity where most needed, tackling radicalisation, increasing security, denying terrorist the means to act and allowing prosecution, reinforcing external borders, minimising impact and increasing support to victims. Security Union Strategy has been adopted for the period 2020 to 2025. From combatting terrorism and organised crime, to preventing and detecting hybrid threats and increasing the resilience of critical infrastructure, to promoting cybersecurity and fostering research and innovation, the strategy lays out tools and measures to be developed over the next years to ensure security in the physical and digital environment.

When we look more into the past, in March 2017 the EU adopted the Directive on combating terrorism which reinforces the legal framework to more comprehensively cover conducts related to terrorism. According to this directive all EU countries have to ensure that they criminalise conduct such as training and travelling for terrorism, as well as terrorist financing. These harmonised definitions of terrorist offences serve as a benchmark for cooperation and information exchange between national authorities.

Following the 2015 Charlie Hebdo attack, the Commission proposed in its European Agenda on Security to establish a European Counter Terrorism Centre to improve the exchange of information and the operational support to Member States’ investigators. Within Europol, the EU Agency for law enforcement cooperation, the Centre pools specialised resources, expertise and information on foreign terrorist fighters, explosives, firearms, financial intelligence and online propaganda to support Member States’ law enforcement counterterrorism units. And before, in 2005, the EU Counter-Terrorism Strategy committed the bloc to combating terrorism globally, while respecting human rights.

On the other side, when we follow the effectivity and credibility of all these painstakingly and pompously articulated intentions, 76% of citizens believe corruption is widespread across the European Union. While we live in a highly volatile world, one must carefully guard human freedoms and real and notable security. However, sometimes exaggerated (and rather ideological than pragmatic) approach of representatives makes every effort to piggyback onto every crisis, slowly endangering both. Unfortunately, it is the same bloc which increases tension in society by tight lockdowns, seeks to limit the legal possession of guns for personal protection and at the same time naively keeps the Schengen Zone open during the years taking mass migration. The number of illegal migrants who have entered Europe is significantly increasing even now. According to the EU agency Frontex, there were more than 160 thousands illegal border crossings in the first 10 months of this year, which is an increase of 70% in comparison with last year. For example, such a policy allowed Salah Abdeslam to escape through 6 ‘borders’ after the 2015 Paris attacks. It can appear the European Union is trying to use ineffective gestures to appease an uneasy public without addressing the elephant in the room.

When we mention the surveillance as alleged tool of the security, it is real bogeyman for most of the Europeans mainly after mass surveillance projects scandals. Even Giovanni Buttarelli, the European Data Protection Supervisor, has said the rulings in this area are neither proportionate, nor necessary. The indiscriminate and blanket targeting of people’s data is not only an infringement on individual liberties, but it also does nothing to address these issues induced by same entity as wants to solve it. Sometimes it reminds the words of one of Islamic State brides from United Kingdom who after return (in September 2021) said in the interview for Good Morning Britain: ”You are clearly struggling with extremism and terrorism. You clearly don’t know what you’re doing.»

For example, after the fall of Afghan Kabul last summer the French authorities discovered by regular screening procedures, that among the evacuated people were 7 men with strong affiliation to violent, terrorist movements. Suddenly, when all of them were waiting in prison to get repatriated back to Afganistan, few French political activists (of Green Party) raised their indexes to protest. „It’s better to have them in France under the surveillance than in Afghanistan doing harm to other people,“ they said. It looks that is not an approach which identifies the risks. Experts can call it very benevolent and we have already seen the consequences of this type of behaviour in the past, concerning mass immigration in late 70’s France.

The Organization for Security and Co-operation in Europe, the world-leading security organisation has warned the spectre of terrorism will continue to haunt Europe for many years to come against an increase in radicalisation in European nations. While the report cites the many attacks and incidents in OSCE countries, it comes as Europe has experienced years of terror attacks including the Manchester Arena bombing, Victoria stabbing and attacks on London Bridge, Nice, central Vienna, Barcelona, Carcassonne and Berlin. Moreover, what international organizations are not showing us, is that, all the terrorist attacks in recent years were commited by 2nd, 3rd or even 4th generation of foreign migrants. They are simply defined as European citizens today, without mentioning their roots. A responsible structure that really cares about the well-being and security of its citizens cannot open the door to the millions of people it knows little about, and then wonder and grieve that such events are happening.

In recent decades, society has been the victim of one of the worst scourges: terrorism, an expressive act of violence that has appeared throughout history with various forms of expression and cruelty. Firstly, sovereing nations of Europe should have to act sovereignly and in the second row to communicate and cooperate with international organizations in the efforts to find the truth about roots of radicalism and to eliminate terrorism with multidisciplinary strategies and comprehensive approaches, embedding all instruments of power. With creation of awareness trainings and contribution of civil vigilance, it is appropriate to professionaly recognize risks, recognize the failures of integration of non-integrable individuals, apply strategies in local and in general level and think about all domains of life and stable state structures which can help in the fight against this unpleasant phenomenon of these days.

Disclaimer: The content of this article was not written by #ElAnalista, being the exclusive authorship and intellectual property of its creator. The article may not reflect the views of #ElAnalista as an organisation.